News Network (Reporter Chen Bo Photographer Xu Zhichi) From April 13th to 14th, “2019 IPR Nanhu Forum International Conference of Globalization and Intellectual Property Protection and the 4th IPR Zhongyuan Forum” was held in Zhengzhou, Henan province, sponsored by Zhongnan University of Economics and Law(ZUEL), Zhongyuan University of Technology(ZUT), Zhengzhou Municipal People’s Government and China University of Political science and Law(CUPL). With more than 1200 IP experts, scholars and judges from different countries, including the United States, Germany, Japan, Korea, Australia, Britain, China,  as well as workers in well-known enterprises, intellectual law firms and publishing gathering together to offer advice and suggestions for the challenge of the intellectual property protection in this new era and the building of a global intellectual property protection system. 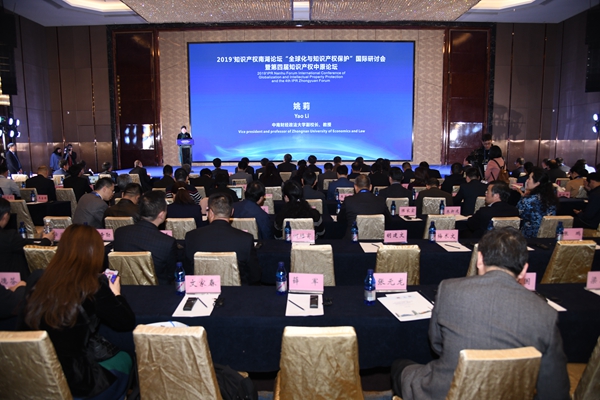 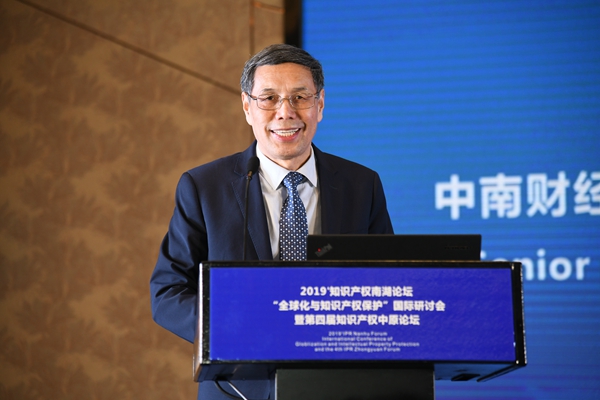 The opening ceremony was hosted by Prof. Wu Handong.

Prof. Yao Li introduced that the Deputy Director of Intellectual Property Research Center of our university was established in 1980 and designated as the key research base of humanities and social sciences of the Ministry of Education in 2004. Now it  has become a prestigious authoritative research institution at home and abroad. Since 2018, in particular, the center has made greater achievements and made greater contributions to the development of national intellectual property: “the Base of Innovation and Introduction of Intelligence for New Age Science and Technology Revolution and Intellectual Property Discipline” was successfully selected into the “111 plan” by the Ministry of Education; In April 2018, the Supreme People's Court approved the establishment of the Theoretical Research Base of China intellectual property judicial protection in our university; In December 2018, the Deputy Director of Intellectual Property Research Center, together with the Law School of Macau University of Science and Technology and the Law School of Hong Kong University, jointly launched the Intellectual Property Legal Alliance of Guangdong-Hong Kong-Macao Greater Bay Area. The first  assistance center of innovation and entrepreneurship intellectual property rights protection for college students was established based on our university; the project“International talent training of integrated intellectual property under the new technology revolution” was successfully approved as the international cooperation training project of innovative talents in 2019 by China Scholarship Council. The monograph On Intangible Property Rights of Prof. Wu Handong was first published in Korea. Many reports of the center was approved by principal leaders of the State Council. In December 2018, Prof. Wu Handong was invited to attend the press conference of the State Council to introduce  the development of intellectual property in the context of China’s reform and opening up.

Prof. Yao Li believed that the theme of 2019 IPR Nanhu Forum was the globalization and intellectual property protection, which bore directly upon the  theme of times. Experts from both at home and abroad would deeply discuss on the theme to promote the systematic and institutionalized building of IP, which would make China a powerful country of IP. 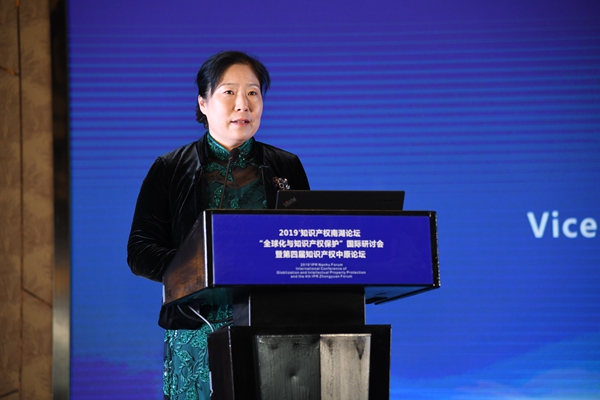 Wang Zongmin, Gu Baozhong, Liu Huaizhang and Park Rongji introduced their respective units,  departments and agencies and extended warm congratulations on the opening of the conference.

He Hua, Deputy Director of State Intellectual Property Office said that since 2004, in the efforts of the parties at ZUEL, Nanhu forum always kept close to the development of the times and focused on cutting-edge hot issues. It built an important platform for experts and scholars in the field of intellectual property to exchange thoughts, and played a positive role in promoting the development of China’s intellectual property.

Luo Dongchuan spoke highly of the scale and influence of Nanhu forum.

The conference set up seven sub forums. On the “internationalization of copyright system in the new age ”, “the protection of business identity and system innovation”, “innovation and patent protection”, “globalization and intellectual property judicial protection” and “the first China (Henan) industrial arts and the protection of intellectual property rights”, “hot issue on intellectual property rights and competition policy”, “the copyright  and the related legal issues of radio, film and television industry”, the participating experts and scholars offered advice and suggestions for the the systematic and institutionalized building of IP, which would make China a powerful country of IP.

The forum held an award ceremony. Zhang Haiyan, President of CTP, delivered a speech on behalf of the sponsors. Li Mingde, Executive Vice President of China’s Intellectual Property Study Organization, former Director of of the IPRC of Chinese Academy of Social Science, Deputy Director of Academic Committee of Intellectual Property Research Center of ZUEL, introduced the evaluation process of the Newcomer Award and announced the results.

Li Mingde introduced the evaluation process of the Newcomer Award and announced the results.

The closing ceremony was presided over by Prof. Cao Xinming, Vice President of CIPS and Director of Intellectual Property Research Center of our university. Prof. Wu Handong presented a letter of thanks to Wang Su, dean of Law School of ZUT.

Prof. Cao Xinming delivered a closing speech, pointing out that 2019 IPR Nanhu Forum was of great practical significance. The theme of the current forum was globalization and intellectual property protection. Thousands of IP academic elites and young talents at home and abroad in the forum and seven sub-forums gave intelligent interpretation and annotation which made the connotation of the subject clearer and extended the theme to science and technology, economy, politics, rule of law, management, organization, culture, ideology, international relations and many other fields. The insights of experts and scholars on would provide theoretical reference for the ongoing fourth revision of the patent law and the trademark law and the third revision of the copyright law in China. It was particularly gratifying that the “CTP IP Newcomer Paper Award”, which was specially set up for young scholars, demonstrated the competence of young talents and was conducive to the sustainable development of China’s intellectual property.

Prof. Cao Xinming expressed his sincere thanks to all the parties concerned for their support and service. It was known that “IPR Nanhu Forum” was established by the Intellectual Property Research Center of ZUEL—the key research base of humanities and social sciences of the Ministry of Education in 2004, which aimed to cultivate and build an intellectual property event and an international academic exchange platform. Now it has successfully held 15 sessions, with more than 1200 participants in each session in recent years. It is the largest and most influential intellectual property academic conference in China. 2020 Nanhu Forum will be held in Xi’an, Shaanxi province.