News Network (Correspondent: Fang Lei) In order to promote the exchange and cooperation between the university and foreign high-level universities, build a new platform for sino-foreign scientific research cooperation, and improve the level and quality of international talent training, our university was invited by professor Thomas Froehlicher, President of ESC Rennes School of Business in France, and Dr. Gerald Reisinger, President of the University of Applied Sciences of Upper Austria. With the approval of the Ministry of Education, our school president Yang Canming professor, professor Zhu Xinrong of School of Finance, professor Sun Qunli of School of Accounting, associate professor Lu Yuanping as well as the vice minister of Department of International Communication, Fang Lei, and these five people visited the two universities from March 17th to March 24th. During this period, together with representatives from ESC Rennes School of Business, we visited the education department of the Chinese embassy in France. 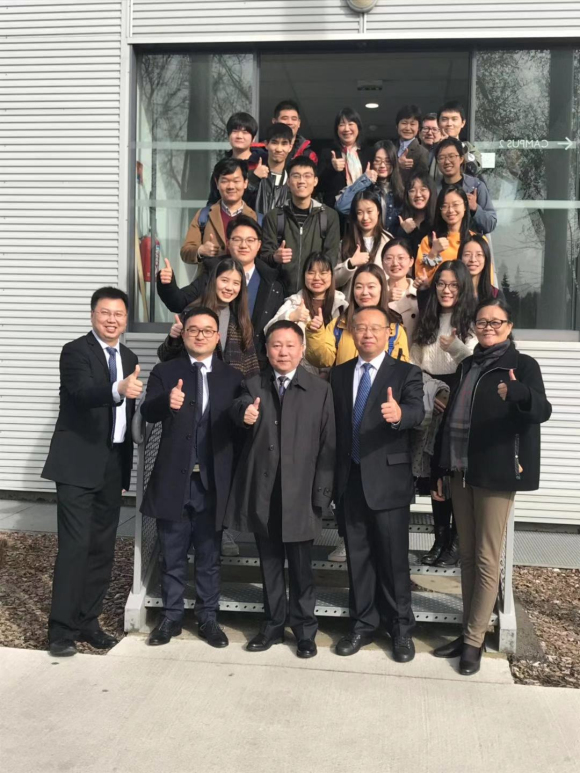 Our school started to establish a cooperative relationship with ESC Rennes School of Business in France in 2008, and both sides have made good achievements in the inter-school student exchange program, talent joint training program and other aspects. In October 2018, both two sides agreed to deepen the cooperation between the two universities and expand their close cooperation in scientific research and overseas education. During this visit, President Yang Canming, on behalf of the school, signed an agreement with ESC Rennes School of Business on “sino-French industrial upgrading and regional financial research center”, which set up an international platform for the overseas cooperation of “Industrial Upgrading in Hubei and Regional Finance research center” of our school. After signing the agreement, the two sides held a working meeting on the work plan and content of the research center. The two parties agreed to strengthen the research center through joint cultivation of doctoral students, exchange of visiting scholars, mutual invitation to academic conferences, joint holding of international academic conferences and joint application of research projects. After the in-depth exchanges, the two sides also signed a memorandum on cooperation in the construction of overseas campus projects, and the French side led a delegation to visit the international campus of the university. During the visit to ESC Rennes School of Business, the school delegation paid a special visit to the students of our university here. President Yang Canming encouraged the students to seize the opportunity to study abroad, broaden their horizons, study hard, pay attention to safety, and combine study with life organically. 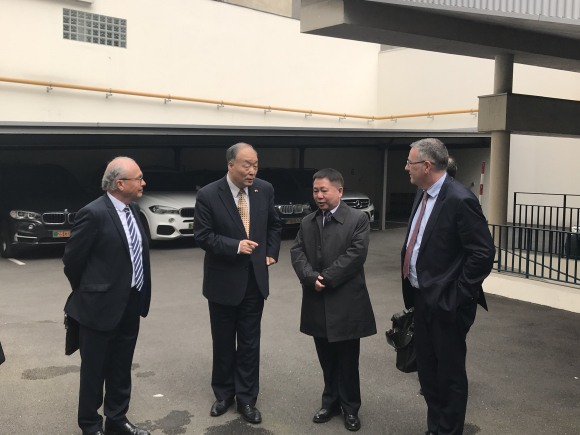 Visiting the Education Department of the Chinese embassy in France

On March 20th, the delegation of our school, together with Francois Chatel, chairman of the boardand Thomas Froehlicher, President of Rennes School of Business, visited the Education Department of the Chinese embassy in France, and were warmly received by Yangjin Gongshen and Gu Jinyu from the Education Department. The leaders of the two universities gave a brief introduction about the basic situation of the two universities, the current situation of cooperation and future plans to the Education Department. Yangjin Gongshen showed his support for the high-level cooperation between the two universities and put forward three suggestions. The first one was that the two sides needed to carry out substantive cooperation projects with a reference to the project mode of “sino-French Institute of Engineers”. The second one was to strengthen French teaching, pay attention to French talent training, especially the integration of “French plus major”. The last one was to closely integrate the “The Belt and Road” initiative, pay attention to strengthening tripartite cooperation among China, France and Africa, cultivate high-quality personnel and provide strong intellectual support for the successful implementation of the “The Belt and Road” initiative. The leaders of the two universities agreed that Yang’s proposal broadened the vision of cooperation between the two sides and pointed out the direction for future cooperation between the two universities. 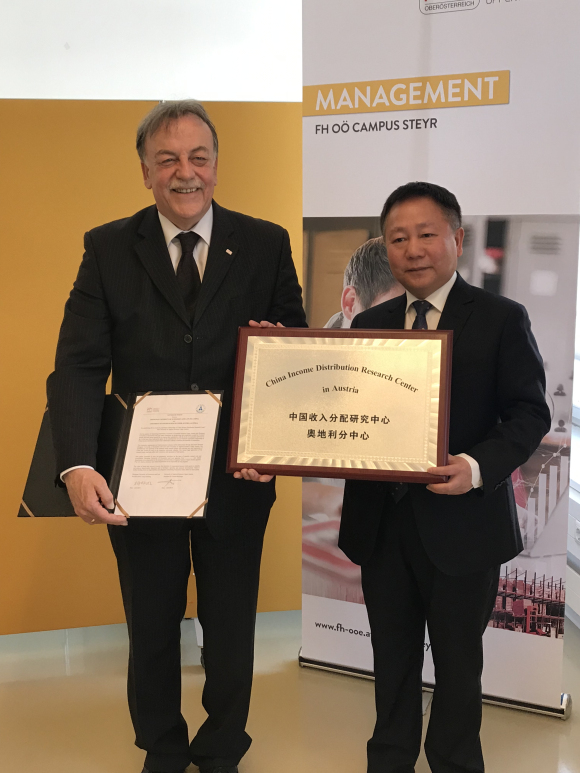 At the University of Applied Sciences, the delegation held a special working meeting with the president and Dr. Gerald Reisinger, vice president of International Affairs andprofessor Andreas Zehetner and dean of the School of Management, professor Heimo Losbichler. The two sides agreed to build “Research Center of Chinese Income Distribution, Austrian Branch”together and signed a letter of intent of building branch together. President Yang Canming, on behalf of the university, presented the plaque “Research Center of Chinese Income Distribution, Austrian Branch” to President, Dr. Gerald Reisinger. This is the second overseas branch established by our university’s “Research Center of ChineseIncome Distribution” (the first branch was established in March 2017 at the University of Novi Sad in Serbia).