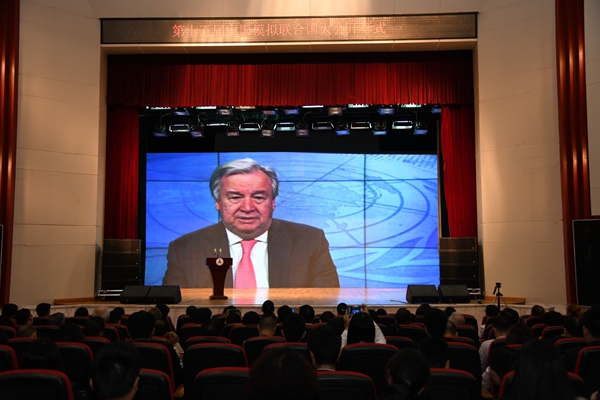 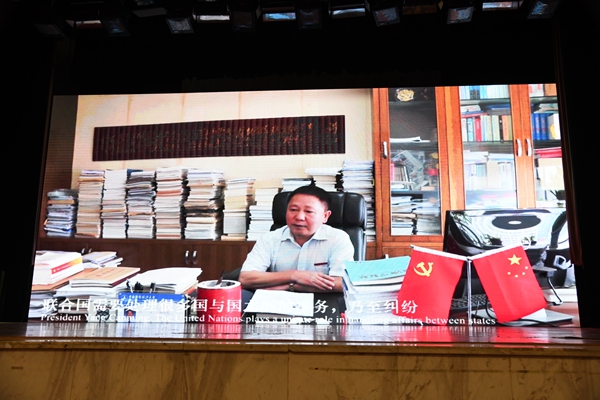 On the occasion of the 70th anniversary of ZEUL, the 15th China National Model United Nations Conference was held at the university. ZUEL President Yang Canming sent his best wishes to the conference through video and congratulatory messages, extending his sincere welcome to the leaders, guests, participating offices and students attending the conference. He said that as the world is undergoing great development and reform, China is increasingly becoming the center of the world. ZUEL has also taken an active part in shouldering the responsibilities of colleges and universities, responding to national policies and guidelines and contributing to world peace and development. He hoped that the youth could contribute to the blueprint of building a community of shared future for mankind by attending the conference.

Zhang Dan, Vice President of UNA-China, said in her speech that as the world is experiencing unprecedented opportunities and challenges, the UN should make more efforts in promoting multilateralism and strengthening global governance, which also requires the active participation of civil society and young people. This year marks the 40th anniversary of China's reform and opening up. China has made great contributions to UN peacekeeping operations, global economic growth and poverty reduction. Vice President Zhang introduced the main work of the United Nations Association of China and indicated that China would cultivate more young talents with international exposure through activities such as CNMUN. She encouraged the students to work for a world of equality, inclusion and prosperity.

Yao Li, Vice President of ZUEL, said that socialism with Chinese characteristics has entered a new era. The CPC central committee with comrade Xi Jinping at its core has grasped the general development trend of the contemporary China and world, contributing China's strength to world peace and development. Vice President Yao introduced the education of ZUEL describing her hope for students to broaden their international horizon with historical mission kept in mind and strive for the Chinese dream of realizing great national rejuvenation.

Zhang Yue, ambassador of International Division of the Ministry of Foreign Affairs of China said that the Chinese government had always supported the work of the United Nations with concrete actions and promoted multilateral cooperation. China would continue to firmly uphold the international system with the United Nations at its core and support multilateralism for building a community of shared future for mankind. Ambassador Zhang fully recognized the role of CNMUN as an important platform to expand the international vision of students and cultivate reserve talents of international organizations.

Ella Kinnear, an official of the Australian embassy in China, said that the Australian government was committed to promoting the comprehensive strategic partnership between Australia and China and enjoyed a strong momentum of cooperation in education, economy and trade, tourism and other fields. Jointly responding to regional and global challenges, the two countries conducted sound cooperation in combating trade protectionism, promoting sustainable development and protecting human rights. Australia would continue to provide assistance to CNMUN, promoting the understanding of Chinese youth on UN affairs and enhancing exchanges between the youth of the two countries.

More than 500 teachers and students from more than 150 universities across the country and representatives from Australia participated in the 15th China National Model United Nations Conference. The conference comprises the General Assembly, the Security Council, the Economic and Social Council, the Human Rights Council, the Third Committee of the GA, the United Nations Environment Programme and other bodies. Around some issues, including “the Global Compact for Migration”, “The Situation in Syria”, “Facilitating Technology Transfer to Developing Countries for Sustainable Development”, “Promotion and Protection of Economic, Social and Cultural Rights”, “Employment and Gender Equality”, “Energy Security and Environmental Protection” and others, the students acting as diplomats from different countries had in-depth discussions and resolutions were adopted. UNA-China invited more than 10 senior ambassadors, experts and scholars from the UN diplomatic field to serve as judges. The conference would also arrange lectures on the international situation and visits to museums and other colorful activities for students attending the conference.

At the closing ceremony of the conference, each committee presented the Best Document, the Best Resolution and other awards in turn. The Best Organization was awarded to Peking University, China Foreign Affairs University, Sichuan International Studies University and Zhongnan University of Economics and Law.

The conference is sponsored by the United Nations Association of China (UNA-China), organized by Zhongnan University of Economics and Law (ZUEL), supported by the International Division of the Ministry of Foreign Affairs of China and funded by Australia’s Department of Foreign Affairs and Trade. The conference has been held annually since 2004. It is the most authoritative national model United Nations activity in China close to the United Nations. This event aims at publicizing the concept of the United Nations, popularizing the knowledge of the United Nations and cultivating high-quality young talents with international exposure and the ability to participate in global governance. It has been successfully held for 14 sessions. Zhongnan University of Economics and Law, founded in 1948 by Deng Xiaoping, Chen Yi and other revolutionaries of the older generation, will celebrate its 70th anniversary on October 28th. For ZUEL’s birthday and the construction of “Double First-rate”, ZUEL and UNA-China jointly organized China National Model United Nations (CNMUN) Conference from October 11th to 14th,promoting the talent cultivation of “connectivity, innovation and openness”.  The 15th conference firstly held in Central China is a great opportunity to help students understand the concept of peace, realize their own historical mission and responsibilities, make self-development and ready for nation-building.