News Network (Reporter Cui Zhenzhen, Correspondent Yu Qijun and Dong Xiaochun) On the morning of November 24th, the award ceremony of the first French Speaking Contest of CGTN was held in Beijing Diaoyutai State Gust House, which was reported in CCTV News “Xinwenlianbo”. Vice Premier of the State Council Liu Yandong and Minister for Foreign Affairs of France Jean-Yves Le Drian attended the ceremony and presented the prize to the young French teacher of our university Zhang Bisi. Secretary of the Party Committee Luan Yongyu,President Yan Canming and other leaders of ZUEL extended their congratulations the first time for the great honor of Ms, Zhang Bisi and School of Foreign Languages. They encouraged the school to take the opportunity to enhance the morale and work together for greater achievements. 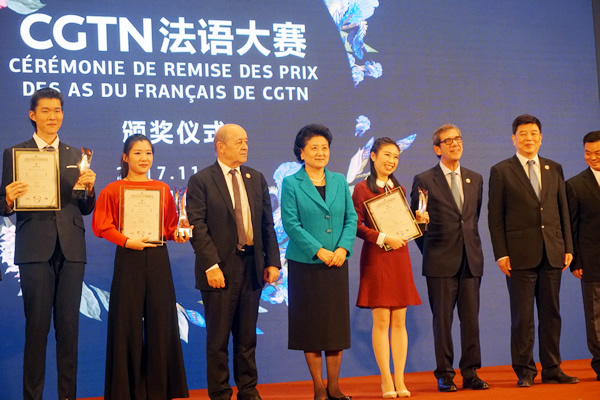 The award ceremony was opened with the French version of the song “Chinese” adapted by the top three contestants and three French students from L`Institut Confuscius d`Alsace en France, followed with the video showing the journey of this contest from Match to September this year. On September 26th, the curtain dropped on French Speaking Contest of CGTN 2017in the new studio of CCTV. Ten contestants stood out from the contestants from three competition areas including China, France and Canada after the preliminary contest and the quarter-final,and made it to the final. After several hours of competition, Zhang Bisi, a new member of the faculty of French of School of Foreign Languages in our university, defeated many strong opponents and won the global champion of French Speaking Contest of CGTN 2017 with her sound basis of French and great performance. 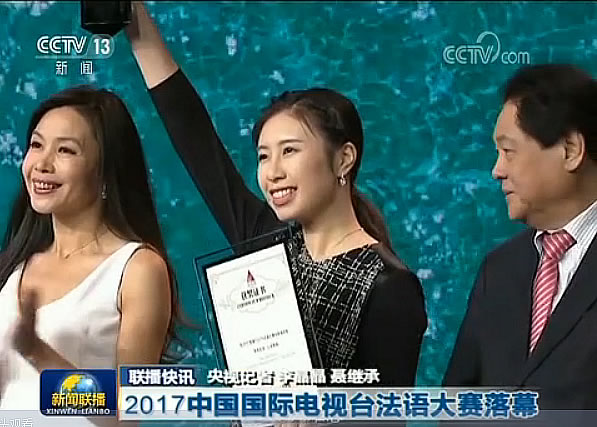 Renamed as French Speaking Contest of CGTN in 2017, the French Speaking Contest of China Central Television was a major TV program founded in 2013 with an original name of French Speaking Contest of CCTV. The contest of this year was highly valued by the governments of China and France. The award ceremony was attended by many senior officials for the honorable moment of the contestants, including Vice Premier of the State Council Liu Yandong, Minister for Foreign Affairs of France Jean-Yves Le Drian, Minister of Education of China Chen Baosheng, Deputy Science Minister Wang Zhigang, Deputy Secretary-general of the State Council Jiang Xiaojuan, Deputy Foreign Minister Wang Chao, Deputy Minister of Education Tian Xuejun, Director General of State Administration of Press, Publication, Radio, Film and Television Tong Gang, Deputy Director of CCTV and Vice President of Asia-Pacific Broadcasting Union Sun Yusheng, French Ambassador to China Jean-Maurice Ripert, Director General of the Department of Globalization, Culture and Development of Education of Ministry of Europe and Foreign Affairs of France, Director of Department of Asia and Oceania of Ministry of Europe and Foreign Affairs of France, Director Chief of Lyon, Director Chief of Versailles, Counselor of Asian and European Strategic Affairs Division of the Office of the Minister, Representative of Director of France-5 of France and so on.