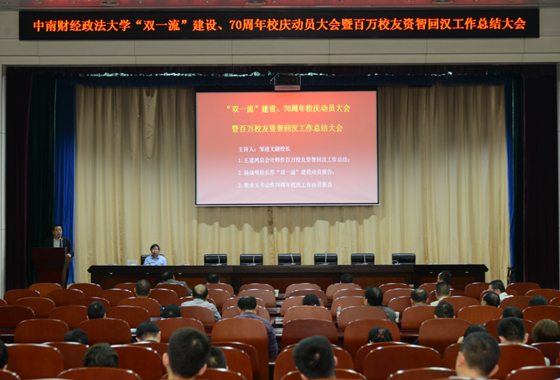 News Network (Reporter Xu Jianfei) In the afternoon of October 27th, the Mobilization Meeting of the 70th Anniversary of ZUEL and the Summary Meeting of the Return of Capital and Intelligence of Millions of Alumni to Wuhan of ZUEL was held in Wenquan Lecture Hall. Presided by Vice President Zou Jinwen, the meeting was attended by Secretary of the Party Committee Luan Yongyu, President Yang Canming, Deputy Secretary of the Party Committee Wan Qingxiang, Chief Accountant Wang Jianhong and Vice President Chenming. 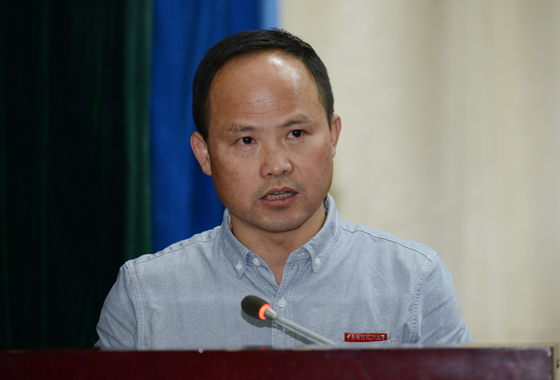 Chief Accountant Wang Jianhong made a summary report of the Project of the Return of Capital and Intelligence of Millions of Alumni to Wuhan· Special Activity in ZUEL. Wan Jianhong said that, the activity was a great success thanks to high attention and careful deployment of the university and the schools, the support and participation of the alumni and the cooperation of all of the faculty and students of the university. The spiritual consensus of the joint effort to fight for the honor of ZUEL and the selfless dedication of all of the faculty, students and alumni was the strong spiritual power of Activity 917, the hands-on leadership of every director of the university, schools and functional departments was the most successful experience and the enthusiastic participation of the alumni was the important guarantee and key factor of the successful development of Activity 917.

Wang Jianhong pointed out that, this activity taught us a lot in the organization of large-scale activity, including better prepared plan, more detailed arrangement and more active external liaison. In particular, in the aspect of alumni, it led us to think about how to gather more information of the alumni, keep up the connection of the alumni from different aspects, integrate the resource of the alumni from different angles and provide services for the alumni in different forms to promote the all-round image of ZUEL, establish work system of alumni, and create harmonious atmosphere of alumni culture of mutual concern between the Alma Mater and the alumni and mutual assistance among the alumni.

Wang Jianhong hoped that with the spirit of valuing the honor of the university and devoting to the cause of the university in Activty 917, the faculty and students could promote the first-class discipline construction of ZUEL with higher spirit, more scientific work plan and better duty fulfillment. 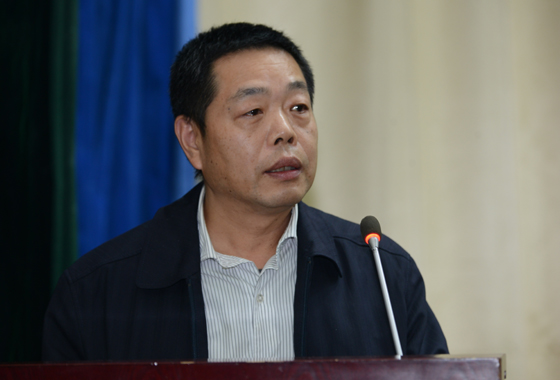 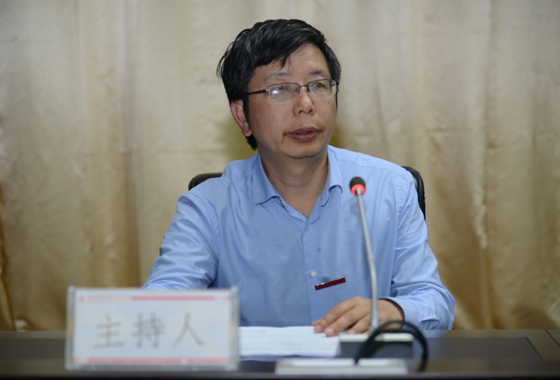 Luan Yongyu made a speech of the mobilization of the 70th Anniversary of ZUEL. He pointed out that, the 70th Anniversary of ZUEL was a point of special meaning in the history of development of ZUEL. We would take the anniversary as an opportunity to go through the history of the university, summarize the experience of running a university, display the achievements of development, boost the spirit of the faculty and students, expend social influence, reach consensus of development and promote the progress of the cause.

Luan Yongyu said, we would have a year to the 70th Anniversary of ZUEL from tomorrow and we should take good advantage of the time to make efficient preparation of the anniversary based on three parts including “Academic Anniversary, Cultural Anniversary and Alumni Anniversary”. Luan Yongyu stressed on three demands.: firstly, to create good atmosphere of participation of everyone by raising awareness with extensive mobilization; secondly, to make scientific and perfect plan of the activity based on development; thirdly, to establish coordinate work system by clarifying and implementing responsibility.