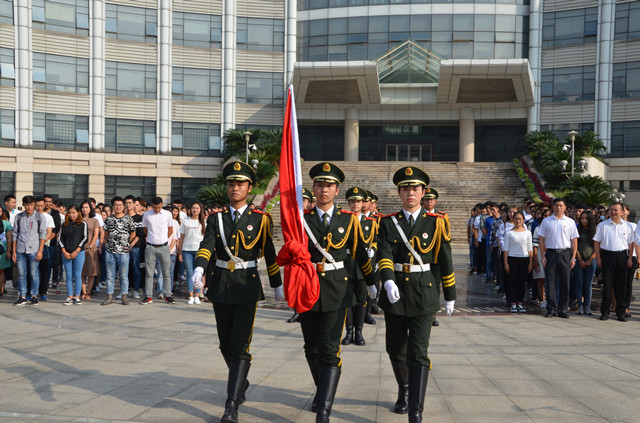 News Network (Reporter Deng Yang, Photographer Du Peng) On October 1st, the activity of “Raising the National Flag and Singing the National Anthem to Celebrate the 19th National Congress of the Communist Party of China” was held in ZUEL, which was organized by United Front Work Department and Working Group of Xinjiang of Hubei Provincial Party Committee. All members of the Working Group of Xinjiang of Hubei Provincial Party Committee, representatives of the teachers from Xinjiang and more than 200 representatives of the students of different ethnic groups of Xinjiang from 9 schools of ZUEL gathered down the flagpole in Zhongyuan Building to respectfully salute the Five-Starred Red Flag and celebrate the 68th birthday of our motherland. The activity was attended by the directors of the Propaganda Department, United Front Work Department and Department of Student Affairs of the Party Committee, Security Department and Youth League Committee, and Deputy Secretaries of Party Committee and counselors of related schools of ZUEL.