News Network(Correspondent:XuJianfei) On April 26th, Giuseppe Conte, the Prime Minister of Italy attended the opening ceremony of The Second Belt And Road Forum For International Cooperation, which was held in Beijing. And on the same day, the inauguration of the Chinese-Italian Academy, which is jointly founded by Spaienza University of Rome and Zhongnan University of Economics and Law(ZUEL), was held in Wenhuan Teaching Building of ZUEL. 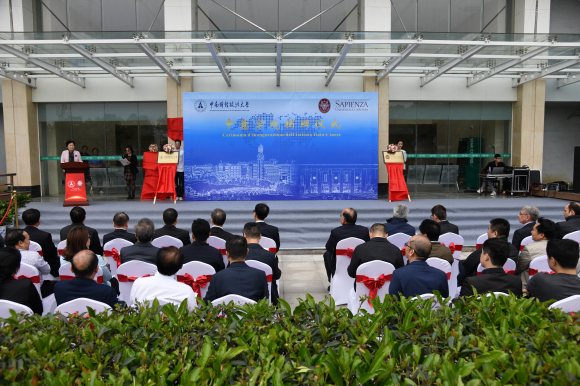 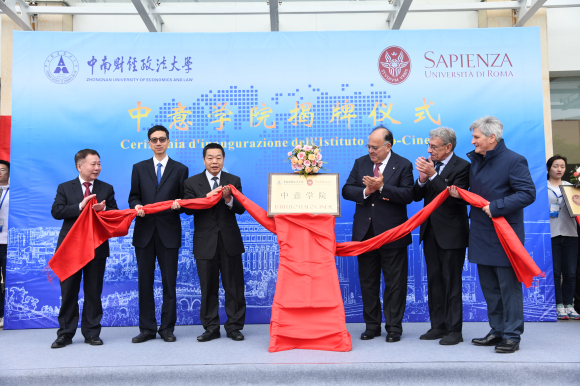 Over the years, the exchanges and cooperation between ZUEL and Spaienza University of Rome have yielded fruitful results. In 2017, Sergio Mattarella, the President of Italy witnessed the establishment of the Chinese-Italian Law Research Center at Spaienza University of Rome. The Italian Minister of Education witnessed the founding of the Chinese Law Library(Rome). In May, 2018, Prof. Yang Canming, President of ZUEL and Prof. Eugenio Gaudio, president of Spaienza University signed the Letter of Intent on Cooperation in Running Schools and the Agreement on Joint Project of Master Education of European Law. And in April, 2019, the ‘European Studies: Comparative Law and European Law’ Master Education Joint Project was approved by Ministry of Education of the People’s Republic of China.

President Yang Canming expressed his expectation on the Chinese-Italian Academy, hoping that it would train high-quality personnel with international perspective, bilingual competence and profound understanding of both China and the western world to serve the commercial and cultural exchanges between China and Italy.

In his address, President Gaudio said that the scientific and academic exchanges between Italy and China have a history of several decades. The establishment of Chinese-Italian Academy marked a new chapter for our cooperation. He hoped that the two universities could carry out more extensive cooperation and exchanges in more disciplines in the future.

Deputy Director-General Huang Guobin said, ‘I hope that with the combined efforts of two great universities, the Chinese-Italian Academy could set a model for cooperation and cultural exchanges between Italy and China.’